Hypocrisy is a permission slip to our morals, telling them to take a holiday. -F.H. Buckley

A hypocrite is the kind of politician who would cut down a redwood tree, then mount the stump and make a speech for conservation.  -Adlai Stevenson

A criminal is twice a criminal when he adds hypocrisy to his crime.      -Marie Corelli

We want what we want, and we want it when we want it. We see what we want to see. We listen only to narratives which confirm our established world views.  Like children, too often all reason escapes us when our desires are intense, even if the fulfillment of such is not ultimately in our best interests. So, when with a seemingly magnanimous stroke of a pen a payroll tax cut is delivered, providing an extra nickel or two to spend at the candy store, we celebrate this opportunity to purchase more jellybeans. But in April, with the realization that those nickels are now due, payment in full, because our cut was not actually a cut as promised, but rather a deferral, joy morphs into rage. When our roads fall apart, or our schools fail, we look to place blame when too often the culprit can be viewed in the nearest  mirror.  Our own hypocrisies enable  powerful interests who exploit our obliviousness to our own responsibilities. Their promises of a utopia devoid of expense and crime, and ripe with economic prosperity align with foundational beliefs steeped in age old hypocrisies which are difficult to uproot because we lack either the curiosity to inspect their inherent flaws or the courage and will to do so.

With a blind eye to our own insufficiencies of principle, ignoring the same in others becomes easy.  Protect and Serve is burnished on police cruisers all over America and TV shows from the dawn of the medium have projected an image to all of us of tough but fair- and right-minded guardians of our safety. When I was a child a common refrain in my schools and in the community at large was “the policeman is your friend”. And for me, that seemed to be true. But I was not born of a darker skin tone. At that time in my life I was naïve to the nuances of skin culture in the systems that run our institutions. At 6 or 7 years of age the cries of “what’s fair is fair” during a school yard game dispute referred literally to the game itself and not to the skin color or ethnic origin of the participants. “With liberty and justice for all” still meant something at six.

I support wholeheartedly the rights ensconced in the first amendment pertaining to religious liberties. I believe these rights apply equally to believers, no matter what form their belief takes and to non-believers like myself. I also believe the basic rights and liberties accorded in the constitution should apply to all of us, no matter our beliefs, what we look like or identify as, or who and how we love. There is another old expression “Live and let live” we would all do well to model this age-old axiom in our everyday lives.

But for some, freedom and liberty are merely buzz words accommodating a certain type of dangerous mass hypnosis. Liberty and justice for all (who look and think like us) Love thy neighbor (unless they worship differently or love each other in ways we don’t approve of) Honor our country (but not in any way which highlights its worst defects in order to correct them).

An evangelical university president condemns mightily the practices of love between consensual human beings not in alignment with his particular brand of righteousness, while simultaneously praising a thrice married womanizer associated with a convicted pedophile and his recently indicted associate, for “upholding …Christian values”.  The university that until recently he presided over cautions that “sexual relations outside of a biblically-ordained marriage between a natural- born man and a natural born woman are not permissible”. Any violations of this policy can result in suspension or dismissal.  Color me surprised then when it was recently revealed that he and his wife had ongoing erotic trysts with a younger man. It appears this was all consensual and all of the parties were adults. The moral infraction here, from my view is not the activities themselves, but the inherent hypocrisy. Students pay a far higher price for such a violations of the university code and do not receive $10.5 million buyouts upon their expulsion.

Despite the obvious systemic problems with modern day American policing, particularly as it relates to people of color, I do not believe all policemen are monsters. I believe most of the people who elect to potentially endanger their own lives every day to protect society from itself do so with the best intentions. But, as it has been said, the road to hell is paved with good intentions. I have also observed enough  at this stage in my life to be able to say with a degree of certainty, that had I been born with an ebony skin tone, being pulled over late at night by a police cruiser would likely be an experience besotted with fear .

The Patrolman’s Benevolent Association, representing over 20,000 New York City police officers formally endorsed a presidential candidate for the first time in its history.   “Protect and Serve” now stands as a pledge to aid and abet an administration cloaked in criminality. Roger Stone (convicted of lying under oath, witness tampering, obstruction of justice/Presidential commutation of sentence the day before he is scheduled to report to prison), Paul Manafort (convicted of tax fraud,  bank fraud, witness tampering, money laundering and lobbying violations), Michael Cohen (convicted of lying to Congress), Michael Flynn (convicted of lying to Congress about improper contact with Russian officials), Rick Gates (convicted of conspiracy against the United States and lying to investigators), George Nader (convicted of possessing child pornography and bringing an underage child to the United States for sex), George Papadopoulos (guilty plea for lying to the FBI about improper contacts with Russian officials to produce dirt on the Democratic 2016 nominee), Steve Bannon (Indicted for fraud).   Dual investigations by New York law enforcement agencies are also underway regarding the possibilities of pre-presidential offenses by the president and his businesses. Let us not forget also, the fines and ultimate forced dissolution of both his phony charity and university.  Add to this the discussion of highly classified information regarding an intelligence source with Russian emissaries at the White House and you have perhaps, the biggest, foulest gumbo of incompetence and corruption in presidential history.

So, the largest police union in this country, whose members take an oath to uphold this nation’s laws joins hands with a man who has achieved much of his own success through his  association with The Villains, Thieves and Scoundrels Union and the hypocrisy reeks. The union president takes in a salary of $130, 764. Half of that paid by the citizens of the City of New York, the other half paid by the union. This despite the fact that in the 31 years that he has been a police officer, more than half of that time has been as a politician who no longer walks a beat or patrols the communities which contribute to his salary.  His candidate regularly insults these communities and commonly refers to their citizens as “thugs”.  I fail to see how this endorsement will help engage and build bridges.  Unfortunately, I do recognize that it may further endanger not only these communities but his own rank and file.

Finally, let  us not forget the very forgettable Rudolph Giuliani, once hailed as “America’s Mayor” and now chief Ukrainian bag man who through a series of appointments, made the man who served as his driver and bodyguard (Bernard Kerik) first, Commissioner of the Department of Corrections and eventually New York City Police Commissioner, despite pushback from the outgoing commissioner and members of his own cabinet (sound familiar?) while also overlooking the academic requirement of a college degree for the position. Mr. Kerik left the NYPD at the end of Giuliani’s term and eight  years later pled guilty to eight felony tax charges and two counts of tax fraud. Guess who pardoned him this past February 18th. 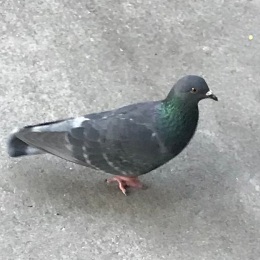