The spirit was freedom and justice

And its keepers seemed generous and kind

It’s leaders were supposed to serve a country

But now they don’t pay it no mind

Cause the people grew fat and got lazy

And now their vote is a meaningless joke

They babble about law and order

Yeah, there’s a monster on the loose

It’s got our head into a noose

And it just sits there -watchin’

America, where are you now?

Don’t you care about your sons and daughters?

Don’t you know, we need you now?

We can’t fight alone against the monster

Happy 243rd birthday America! I wish you many more. But before you blow out your candles, I hope you can tolerate a few comments from a fan. I understand that the idea of tolerance is frowned upon in some quarters today, but one of your biggest promises to us has been that we should never feel that expressions of criticism need to be withheld. I believe you understand that we grow more through critical evaluation than through propagandist praise.

It took decades for me to differentiate between your  promise and your reality. Your promise is extraordinary. Your potential should never be doubted.  But I am not naïve, America. I know that even Superman has a weakness. Promises made by mere humans will not always be kept.  As a child I pledged allegiance each school morning and, as I stood with my hand over my heart staring at the red, white and blue starred and striped banner in the front of my classroom,  I was proud to be pledging my loyalty to such a worthy premise. But it must be said, the promise of this premise too often has rung hollow for those who fall between the cracks of your magnificence.

If we are as special as we purport ourselves to be, then why, America, do we incarcerate people at rates more than triple that of most other “civilized” countries in the world? Can we be so special if so many of us are desperate  criminals, unfit to live the majority of our lives in anything but the shadows of our society? And why, oh why America, if the execution of our justice is equal,  are so many of your incarcerated possessed of a dark skin pigment?  Why is the commitment to life, liberty and the pursuit of happiness not given as much credence by those with the legislative responsibility to keep us safe than their apparent commitment to ensuring that even the most the unbalanced among us may continue to have access to weaponry designed solely for the killing of human beings in large numbers?

I know you have tried America and I know you have grown.  And I believe that growth  is a direct result of those goals of the human spirit embedded in your founding documents. I feel there is nobility in most people and in those sentiments the better parts of their own selves may emerge.

But America, as I write this our house is once again divided against itself and as our very foundations quiver, I fear that it may not stand much longer. There was a time when the inhuman enslavement of other human beings on our shores was common practice and those who rose up against such inhumanity were considered threats to the democracy and enemies of the state. Yet, over time, their voices gained strength  as a realization dawned that such an institution should not exist in a land that purports to stand for liberty. Such an institution, aside from being a high crime against humanity itself,  was the most blatant of hypocrisies when compared to the noble aspirations of your founding documents. And so, blood was shed, and the institution was cast aside.

Still, liberty wasn’t truly attained for those afflicted by this dark stain on our national character because bigotries and hatreds spawned by fear and economic greed die hard in the swampish hearts of those incapable of human empathy. So, a fellow named Jim Crow continued to manipulate your laws, denying  the fullness of your democracy to too many for too long. Your beautiful quilt has once again been stretched and altered to a better fit, but a further remeasuring with the tailor’s tape is necessary for too many still find difficulty exercising their democracy to its fullest extent.

My father was not well educated and was possessed of his own ignorance and bigotries but in his own way he saw better parts of himself mirrored in your principles, America. I believe he understood the threat to you from the little mustachioed menace across the Atlantic and so he put on a uniform and went to work at war to keep  your promise safe from the dystopian models infecting free people across the Atlantic.

When he returned, like many of the men from our neighborhood, he labored on the west side docks of Manhattan and became an avid consumer of the products of one Mr. John Barleycorn. Knowing the waterfront was a dangerous place, I assumed his nocturnal shouts of “get down, get down” were the sub conscious reenactment of some horrible accident on the waterfront. Accidents happened there often, and some were more accidental than others.  I was aware, generally, of my father’s service  during the Second World War. I knew that he had served in  the European theater in Italy. But like most men who experience war, conversations of such were rarely and reluctantly engaged in. Years later, after he had passed, upon relating the “get down, get down” story to my older siblings I was educated as to what the more likely genesis of this expression was. You see, my father had charged the beach at a place called Anzio.

So, America I think I can fairly say that my father would not have been  thrilled with the sight of people wearing the insignia of a movement dedicated to  genocide, ranting and raving in an American city and killing an innocent American citizen for raising her voice in objection to their vile beliefs.

Nor do I think he would be happy with the sight of children being imprisoned, separated from their parents and left to die while in the custody of the nation whose freedoms he fought to preserve on a bloody beach in Italy in 1944, as his buddies were picked off like clay pigeons at a sick arcade attraction.

So, in light of that America, when did we become a nation that bellied up to the bar with dictators while simultaneously disowning our relationships with the people who fought by our side to preserve our freedoms? When did we decide that there were some among us who were not accountable to the rule of law as they use their office as a shield, not for reasons of national security, but rather to inoculate themselves from the liabilities of possible civil or criminal penalty? Or both? Who wrote that memo? And I want to see the time stamp on it because I believe I missed it entirely. When was it decided that the pollution of your spacious skies and the waters which feed your amber waves of grain were less important than the profits made from the gradual execution of the very planet we live on?  When America, did we decide that the religious beliefs of a few should be allowed to impact completely on the lives of all of your citizens regardless of whether they share those same beliefs or not? When will the phrase  “ all men are created equal” apply equally to both and all genders? I know democracy can be a process, but it has been a long time since Susan B. Anthony, and it appears that women still don’t own their own bodies. Why is dark money and influence still allowed to seep into our electoral process? And isn’t full transparency regarding our elections a good thing? And if that is so, why are investigations into such things frowned on by many of  the very people charged with preserving, protecting and defending our constitution?

So, America, I will be skipping your huge party with tanks and resemblances of the greatest hits from Red Square. But let us be honest America, it might be your birthday, but this is not your party. This is not meant as an affront to the many who toil in your service both here and abroad, some of whom will be operating those tanks, trucks and planes, although to be sure, that is exactly how words like these will be interpreted by the many faux patriots who have hijacked your party while they eschew your very foundation, the rule of law.

I will celebrate you in my own way by continuing to support my fellow citizens who daily do the things that really make America great. I will vote in every election, primary, school board, or dog catcher ballot  if that is what it takes to make your future celebrations worthy of your spirit. Besides that, it is my duty as a citizen.   I will help my fellow citizens, regardless of the tone of their skin, their religion, their income, their gender identity or who and how they live and love to exercise the democracy you promised to all of us.

I will continue to rejoice in your arts and your music. For you produced jazz, as well as blues and all of that gave way to rock and roll. Please remember America, that the gift of this music was born of the blood, sweat and tears of your darker citizens whose ancestors came to these shores deprived of your promises right from the start.

I will celebrate you through baseball, for this game shared by generations, is one of your greatest gifts and perhaps one of the most visible mirrors into both  our national racial struggle and its progress thanks to people like Jackie Robinson, Branch Rickey, Pee Wee Reese and Larry Doby. But most particularly, Jackie Robinson whose example of  grace under pressure became the very embodiment of such an ideal.

Perhaps I will read Grapes of Wrath again, to remind myself that your greatness  America, is not culled from false pageantries in the service of demagogues but from the challenges met through the steely determination of those who pump your beating heart in your fields, your factories, on your sidewalks,  in your diners and anywhere  where people work to create a better place for themselves, their children and their children’s children.  Happy birthday America, whoever you are. And I do hope you get better soon. We need you. 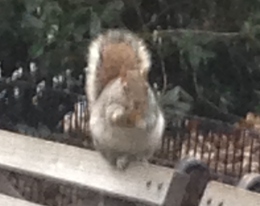